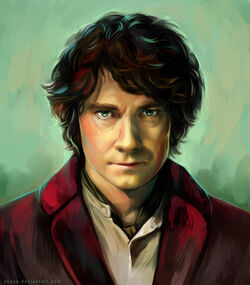 Nope! No adventurers here, this Hobbit would like to stay in Hobbiton thank you very much, good day!

Bado Boffin was the descendant of Gerbulas Hamwich, son of Siagrin Boffin and Gwolla Hamwich, his full name was Bado Hamwich Boffin. He was known for his adventure to slay the Stone Giant in the Iron Hills. He was born sometime in the Eleventh Age

Due to Siagrin having some relations to Samwise Gamgee, Siagrin inherited Bag-End, later in his years he met the beautiful young Hobbit Gwolla Hamwich, the 2 were adventurers, and after 5 adventures together, they fell in love, married and had a child his name was Bado Boffin, Bado grew up and turned out to be like your average Hobbit. One day when Bado was 16 his parents were currently on an adventure, Bado found out his parents were killed by Great Spider's. Bado was devastated when he heard the news, Bado then had to raise himself and as he grew up, he hated adventures.

At the age of 41-Years-Old, Bado was sitting on the bench outside Bag-End smoking and then he was approached by the Wizard: Arien the White who offered him an adventure, Bado declined due to him hating adventures because of the death of his parents and then leaves. Later on that night he hears a knock on the door and sees a Man, Elf and Dwarf, and of course Arien. Arien asks if they come in and due to Bado being raised polite he said yes and allowed them to come in they all introduced themselves, Soramir son Garamir, Andriel of Rivendell and Vulkar descendant of Voinar. Arien then explained why he needed Bado, since Bado was a descendant of the great Hamwich family and son of the greatest Hobbit adventurers and that he needed a Hobbit for his quest. Bado asked what quest was it? Arien then said that the evil Stone-giant Soren threatens the safety of Middle-earth and that he need all of the species of Middle-earth assembled to defeat him like Bilbo, Bado had two sides which he'd like to call the Boffin side (non-adventurer) and the Hamwich side (adventurer). Bado then gave in to the Hamwich side and agreed to go on the adventure. Bado then took the family sword Burner, they then started heading for the Iron Hills where the Stone-giant dwells, suddenly it started raining and Andriel saw that Bado was freezing and gave him an Elven Cloak. After a few days of travelling they had ran out of food and the closest place was Rivendell so they were forced to go there and rest for a while.

Finding the Second One Ring of PowerEdit

After the rest, Bado and the rest continued their quest to the Iron Hills and were going to take the shortcut through Old Forest Road until they were outnumbered by Goblins and taken back to the Grey Mountains where they were going to eat the Hobbit, Elf, Dwarf, Human and Wizard. Then the wizards whispered through Bado's ear and told him to use his "stealth" to slip away unnoticed and he did. But a Goblin who was behind was waiting for him and attacked Bado, Bado used Burner to defend himself but then the Goblin tackled the Hobbit off the edge where they fell into the darkness. Bado woke up to hear something singing "Food, oh dear food", Bado was afraid. He heard the tells of Gollum as a child and this reminded him of it, Bado tried to escape but he had some wreckage on his leg, "Oh no, no, no you cannot escape" it said, Bado asked what it was and the creature said Anatta, Bado said that he should not eat him and tried to hold Anatta off so he could find Burner, Bado finally found Burner and sliced Anatta's chest which caused him to scream while Bado had the time to pull the wreckage off and escape, but Anetta would not let his dinner get away and chased Bado. Bado ran for dear life and suddenly tripped over and found a ring, for some unknown reason he picked it up and heard Anetta scream "NO! THAT'S MY RING! YOU CAN'T HAVE IT!!" Bado ran for longer and tried to escape through a crack in a wall but got stuck but he ripped his way through and Bado dropped the Ring causing Bado to put it on with his Index Finger, and before he knew it Anetta went past him, Bado found out he was invisible and found his way out (eventually). Anetta then swore to hunt this Hobbit down until the ends of the Earth. Bado eventually found his way out of the cave to see that the group was okay and had escaped unharmed. Bado took the ring off and greeted them, Arien was angry at Bado for not helping so Bado explained everything (except from the Ring). They then continued their journey from the Grey Mountains.

Finally after a few days the group arrived at the Iron Hills only to be attacked by Soren straight away, they all fought Soren for hours, Bado quickly told Arien of the ring (Bado thought it was magic), Arien then told Bado to put the ring on and dissapear, Bado obeyed and put it on he then climbed the Stone-giant like a climbing frame and went on top of its head and stabbed it with Burner to weaken it long enough for Andriel and Arien to use their magic to weaken it and Soramir to deliver the final blow Soren then dropped to the ground, Bado fell off but Soramir caught him stating "Well done little Hobbit".

After that Bado, Arien, Andriel, Soramir and Vulkar were given Gold for risking their lives for defeating Soren by the Dwarves of the Iron Hills, Bado said farewell to his new friends and departed for Hobbiton, he took 4 small chests full of Gold and was the richest Hobbit in the Shire for 96-Years.

Bado married and had a son who would later have a son of his own, Fredo Boffin. After his son died when Fredo was 5, Bado adopted Fredo and the 2 lived together happily and peacfully (note: the two shared the same birthday). On Bado's 137th Birthday and Fredo's 33rd, the Rings will was too strong for him and he decided to give it to his grandson, little did Bado know that he was giving his only grandson a heavy burden. Later after his birthday party, he decided to leave the Shire and live with the Elves in Rivendell. 1 Year later after Fredo destroyed the Ring and Bado was free from the rings grasped, Bado died peacfully in his sleep 4 years later. Bado was known as the oldest Hobbit in the Shire and died at the age of 141.

Bado was an average size for a Hobbit 3'6 with brown hair and blue eyes.

Bado resembles the personality of Bilbo Baggins, they also have the same initials B.B, Bado hated adventures when he was younger but enjoyed them after exploring the wonders of Middle-earth.

Burner- Burner was the family sword that was passed down from generation to generation.

Elvish Cloak- In Bree, Andriel gave an Elvish cloak to Bado which would keep him warm, little did he know it would save him multiple times.

Retrieved from "https://lotrfanon.fandom.com/wiki/Bado_Boffin?oldid=20502"
Community content is available under CC-BY-SA unless otherwise noted.