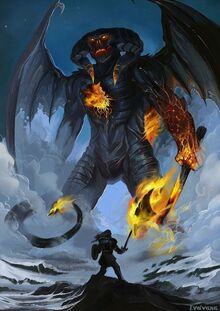 Dûrûr (literally meaning "Dark Flame" in Sindarin) was a Balrog of Sauron who's rank at that time was lost. He proudly claimed to be the first of the Balrogs. Dûrûr and Malraugin were among those who after the capture of Belegurth, continued to obey the directives of Sauron and Kosomot and most likely he also fought in every War of Wrath, being overwhelmingly loyal to his masters as were the other Balrogs.

With the defeat of Sauron, this Balrog fled to the eastern part of Middle-Earth with an army of Orcs and came upon the place Men called the Dark Land sometime during the Second Age. He remained there, waiting for his master Sauron to once again openly declare himself.

During the Second Age, Ar-Pharazôn and other Numenorian Kings and Queens sent ships down to the Dark Land for colonization and exploration. But after the fateful Destruction of Numenor, the colonies lost contact with Men. Instead of dying off, though, these Men and Women survived and retained the knowlegde of their ancestor's from the North. New Numenor they called the land. They smithed, farmed, read, wrote, and so on. But these Men were also arrogant, for they explored deeper and deeper inland, not heeding to what dangers might lay in wait. Eventually, they awakened Dûrûr and ran in fear from him and his horde of Orcs. One man named Naktura led a rebellion against the Balrog and thus started the Dagor DurTaleth (Battle of the Dark Land).

Dûrûr succeeded in killing Naktura and driving the Men into hiding. For years, the Balrog roamed across the land and proclaimed himself Ergamos Gorthaur (Emissary of Sauron) and Hirren DurTaleth (Regent of the Dark Land). With help of Orcs from Mordor, sent by his master to conquer, he built cities, towers, strongholds, bridges, mines, and so forth. After years of construction, Dûrûr built a city-stronghold Broniad (meaning "to endure"), in which he dwelled. He found a palantir hidden in the treasure, using it to re-establish contatc between himself and his master Sauron. Under the orders of the Lord of the Rings, he took command of all the men and orcs near him and started preparing for the War of the Ring. However, the Great Enemy was defeated and the Balrog was forced to remain where he was, undisturbed for many more years to come and awaiting for Sauron to return during Dagor Dagorath.

But in year 102 FoA, the descendant of Naktura, Belgion, lead yet another rebellion against Dûrûr starting the War to Reunite, or Dur Aderthad. They fought for 5 years before Belgion and his Army laid seige to Broniad. For three years they fought, and then Dûrûr led an army of 13,000 orcs against the army of Men around 15,000. The whole Orc Army clashed with the Army of Men for five days and four nights before Belgion slayed Dûrûr after the Balrog killed Kildirac, a lifelong friend of Belgion and Captain of the Archers. The majority of the orcs were killed there but the ones that were able to flee were hunted down and destroyed.[[Category:Dark Regents]

Retrieved from "https://lotrfanon.fandom.com/wiki/D%C3%BBr%C3%BBr?oldid=22885"
Community content is available under CC-BY-SA unless otherwise noted.