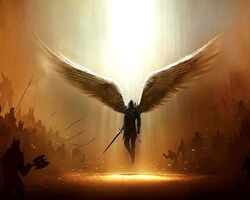 Maladhros the Fair (before he served Sauron)

Cerondur
Title
Lord
Race
Maiar
Lifespan
Immortal
Gender
Male
Realm
Balorn, Far Rhun
Culture
Weapon
Broadsword
Peter Jackson's Film Trilogy:
Actor
N/A
Voice
N/A
Dorbon was a Maia. He fell into darkness and became a servant of Sauron. Dorbon's original name as an Ainur was Maladhros, but his master changed it to Dorbon when he came into his service.

In the First Age during the War of the Jewels, Dorbon was one of Sauron's strongest servants. He was originally a Maia of Aule, and his name was Maladhros. Mairon, Son of Eru Iluvatar, the First of the Ainur, Mightiest of the Ainur and Chiefest of the Ainur had secretly joined forces with the fallen Vala Melkor, so he needed loyal servants act as extensions of his will. Due to him being Eru's regent and as powerful as him, many willingly sided with him including Maladhros.

Mairon became a father figure for him and was the one to rename him Dorbon, similar to how he himself had been called "Sauron" by the Elves. The fallen Maia quickly rose through the ranks to become one of the Great Enemy's chief advisors and occasionaly spied for his master on Melkor, seeking any signs of rivalry between him and Sauron.

During the War of Wrath at the end of the First Age, when Morgoth was finally captured and cast into the Void, Dorbon made the foolish mistake of standing up to the Valar all by himself even when Sauron had retreated and Angband destroyed. Dorbon's final efforts were in vain, for the Valar swept him up and carried him off to Aman as a prisoner along with Morgoth and a few other lesser servants of Sauron. .

When Dorbon had been brought back to Aman and placed before the Valar to be judged, it was deemed that he would not be cast into the Void like Morgoth but would instead be rendered useless and shamed as an Ainur should not be. Therefore, Dorbon was tortured until he was hardly recognisable, then the Valar had the power sucked from his very soul. They had Dorbon paraded around the streets of Valmar to increase his shame. Finally, the Valar had his memory wiped from his mind and Dorbon forgot all that had happened and even that he was a Maia. In fact, from now on, he thought he was an Orc, and he certainly looked like one. Then the Valar cast him back into Middle-Earth where he wandered for thousands of years as an Orc, serving a few masters throughout history. All through the Second and Third Ages Dorbon was in Orc form, and did not know who he was. Even though Dorbon looked as an Orc, others still sensed power in him they could not understand, and he seemed mysterious to those who peered into the depths of his mind. Of course, even Dorbon himself did not know the truth, and in his days as an Orc he named himself Gulgos. This attracted the attention of Sauron who brought him into his service.

At the end of the Third Age, when the War of the Ring was won by Gondor and Sauron was defeated, Dorbon (or Gulgos as he was then called), was already a high-ranking commander in the Dark Lord's army. The Great Enemy knew who Gulgos really was, though he did not reveal it. Sauron sensed an inner power in Gulgos, and recognised who he really was, even though Gulgos did not know himself. The One did not utter a word though, because he did not want the Maia to become a second Melkor. Sauron did not know that the Valar had drained Dorbon's power, so even if Dorbon were to discover who he was he would still be powerless. When the One Ring was destroyed in Mount Doom and Gorthaur was defeated and he was cast into the Void. Deep inside, Dorbon's spirit but not his mind remembered Mairon's care for him in the past. Through unknown means, he learned the truth, but repented of his ways, deeming the past to be miserable. However, even from across the Void, the will of Sauron was strong and Dorbon fell once again under the influence of the Lord of the Ainur. Slowly, he again became evil and began seeking ways to release his master from his prison. Eventually, Dorbon took lands under his control and became a dark lord as a regent of Sauron, with great armies and wide dominions. Dorbon renamed himself Cerondur, for the old times were gone. He dared never to go back into the far West of Middle-Earth, there is where the Reunited Kingdoms lived on, and the glory and blood of Numenor is still too strong in the Kings of that realm.

Retrieved from "https://lotrfanon.fandom.com/wiki/Dorbon?oldid=22140"
Community content is available under CC-BY-SA unless otherwise noted.