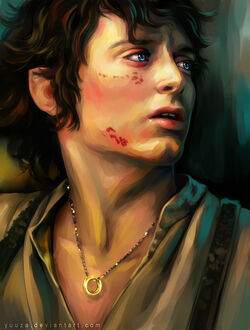 Fredo Boffin was a descendant of Gerbulas Hamwich and was the grandson of Bado Boffin, Fredo was a Ring-bearer of the Second One Ring of Power.

Fredo was born in Bree and lived in Bree with his parents until he was 5, the Hobbit landlord of Bree came to Fredo and told him his parents died on an adventure and that Fredo was now evicted from his house in Bree, the only family he'd had left was his grandfather Bado in the Shire. Fredo then went to Bag-End and told his grandfather everything, Bado then saw that he felt sorry for the child and decided to adopt him. Bado and Fredo would then have a strong bond that could never be broken.

On Fredo's 33rd Birthday and Bado's 137th. Bado decided he wanted to make the Ring a family generation object and so he passed it down to Fredo, later on he met Arien an old friend of Bado's from his younger years. That night they had a pary to celebrate their birthday's, Fredo was a bit drunk and decided to go to bed early, he was then awoken by Bado and was told that he is now inheriting Bag-End and everything else because Bado was leaving to go to Rivendell. Later that night, Arien barged in and demanded to see Bado, Fredo said Bado has left so Arien asked if he still has the Ring and Fredo told him he now has it, Arien then told Fredo that it was the Second One Ring of Power and that it had to be destroyed, Fredo then agreed to help stop it. The two then headed to Bree until Fredo's friend Wilibald "Wili" asked where he was going, Fredo told him an adventure and Wili asked if he could come with, Arien agreed.

Retrieved from "https://lotrfanon.fandom.com/wiki/Fredo_Boffin?oldid=6802"
Community content is available under CC-BY-SA unless otherwise noted.