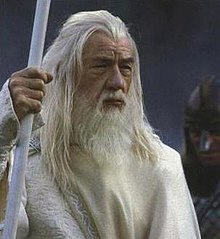 "Many that live deserve death. And some that die deserve life. Can you give it to them? Then do not be too eager to deal out death in judgment. For even the very wise cannot see all ends." -Gandalf
Name
Gandalf Olórin
Also Known As
Mithrandir

Born under the name of Olórin, Gandalf is a Maiar Istari born in the ancient land of Valinor during the year 5092 BFA (Before First Age). He spent his early days training under the Valar Nienna, who tought him to become quite nice and wise. Though he loved the beauty of Valinor, Olórin never felt like he belonged in his homeland, and he was often ridiculed by his for not being able to find a staff. After extensive training, it was decided by the Valar that he was to join his friend Radagast in becoming a protector of a far off land known as Middle-Earth. Given the name of Gandalf the Grey by his mistress Nienna, he sailed off with the other members of the Council of White to the second continent of Arda, given the task of deafening the land from the servants of the Dark Lord Morgoth.

Nearly one hundred years after his journey to Middle-Earth, Gandalf was contacted by his good friend Radagast the Brown, who asked him to travel to the Elven Palace in Darvendell where Ragadast had been living. Traveling for two days, the young wizard finally found himself in the Elven Palace, where King Tork of the Men angrily greeted him by asking why he was too late, to which Gandalf replied "It is not my job to be late sir, nor is it my job to be early. I shall arrive precisely when I need to". He then walks in to the palace hall where he finds the other Three Kings of Men, Ragadast, and the Elven Prince Elrond. Elrond told Gandalf of an ancient prophecy foretelling the second rise of the first dark lord Morgoth, inviting Gandalf to assist them on the quest, to which he reluctantly accepted. Elrond then led Gandalf to the great hall, where he was gifted with the might sword of Iphyrus to aid him in his quest.

Traveling East to find the Blue Wizards, Gandalf is soon attacked and nearly killed by a group of Orcs from the mountains. Luckily, his group is soon saved by a ranger by the name of Thorn Avalast, who soon decides to join the group on their quest. Gandalf shyly approaches the Ranger, asking him if he will assist him in melee combat. Thorn agrees, and begins to give Gandalf lessons in swordsmanship and horse riding. It is learned later in the school that the orcs who attacked them were sent by the White-Cloak, who was told by Tork of their location. Thorn, despite being aware of this fact decided to say nothing, as Tork was secretly his brother and he did not want to get him hurt.

The Blue Wizards and RodanEdit

After traveling far to the East, the group finally meets up with the Blue Wizards, who tell them that they are being followed by a mysterious necromancer in a white cloak. The Wizards fear it may be their leader Saruman, however, Gandalf dismisses this theory saying "Saruman is our leader and he has protected middle earth for a hundred years, I find no reason to call him a traitor". Thanking the wizards, the group proceeds through the Forest of Nevur, where they find a secret passageway they believe to be more safe. It is there that they meet a corrupted Maiar named Rodan, who, after leading them through the passage attacks Gandalf and Ragadast before his death and the hands of Prince Elrond.

After finally making their way out of the Mountain of Krolax, the group is wakened up to the squeals of Orcs and Goblins. Finding Tork missing, they begin to say that he was killed by the Orcs, until Thorn reveals that he has been working for the White-Cloak which is soon confirmed as Tork is seen leading the Orcs, riding on a Warg down the mountain. Thorn then kills Tork, and the group manages to escape, and Gandalf realizes that he was too trusting of Tork, saying "Trust is an important thing, you need to have enough but if you have too much it will grow to become your weakness".

The group finally reaches the three roads to Doran, each containing a terrible prison, one containing your greatest desire, one containing your worst fear, and one containing nothing, each one with a door at the end. Splitting up into three groups, Gandalf and Ragadast travel down the road to their worst fear, while Sanx Tranx and Gorn travel down the road to their greatest desires and Elrond and Thorn travel down the road to Nothing. Gandalf and Ragadast are greeted by a terrible demon servant of Morgoth, the Balrog, however they manage to get past it quickly and open the door to Doran. Sanx Tranx and Gorn find riches and beautiful women in love with them, and though Sanx and Tranx nearly fall to the apparition and stay their forever, the more responsible Gorn manages to get them through to the door. Thorn and Elrond soon find themselves in nothingness, the worst of them all. Thorn, who is used to the nothingness that comes with being a ranger is completely fine, however Elrond who is used to a life of comfort and wealth finds himself in a mental breakdown, however Thorn finally manages to get him through the door. The group has all finally gotten through their respective doors, and find themselves in a dark, horrible place full of flames and shadows, the Ancient Dark Kingdom of Doran.

After hiding from a group of vicious trolls, Gandalf finds himself separated from the rest of his group, walking through the damp swampy tunnel in search of his friends. It is in this tunnel where he finds a dying water dragon by the name of Kaurog, who at first frightens him, however the wizard soon finds himself mourning for the dragon. The dragon, who tells him that he was killed by the Servant of Morgoth, tells Gandalf that a war is coming with its dying breath. Gandalf gives the beast a proper burial before continuing on his path out of the tunnel, finding himself quite saddened by the death of the Dragon saying "It's not right...why would anyone want to do something so terrible?" Eventually Gandalf rejoins his group, however he finds himself greatly changed.

Finally reaching the great Black Palace of Doran, the group seemingly enters the palace with ease, however they soon find themselves in a seemingly endless hallway with a door at the end, however, Gandalf soon discovers it is just another apparition created by the dark kingdom, and after focusing his mind manages to reach out and open the door. He then says "The mind can be a prison or a palace, it just depends on how you think of it." The group faces many, many obstacles and challenges on their path to the top of the tower, nearly killed at the top before being saved by the two wizards.

At the top of the Black Palace, the group and the two blue wizards find the white cloak, servant of Morgoth, leader of the Istari Saruman the White, who had been corrupted after attempting to destroy the One Ring nearly fifty years ago. It is too late however, and Saruman has nearly completed his ritual of getting Morgoth back from the void. Gandalf realizes yet again that his kindness has blinded him, as he remembers that if he had not shot down the blue wizards original theory about Saruman they may have gotten their in time. Morgoth is finally brought back to Middle-Earth, and Saruman teleports them both to Gondor to begin the destruction. The war begins and the book ends with Gandalf saying "we have to go back."

The War of Morgoth and Further AdventuresEdit

Gandalf acts as the hero of the War of Morgoth, ending the war by banishing Morgoth back to the void and wiping the minds of everyone but himself, Elrond and Ragadast of Saruman's treachery. Gandalf explains to Elrond that for now Saruman can go on secretly planning Middle-Earth's destruction, and that right now the people still needed someone to look up to for help. Elrond then asks why he decided not to wipe his mind, to which Gandalf yet again says yet again "Trust is an important thing, you need to have enough but if you have too much it will grow to become your weakness", before walking away to resume his former life. Elrond then tells him that he sees a grey hair on the wizards head, directly before the book ends. Later in life, Gandalf acts as the guide of Bilbo and Frodo Baggins before returning back to his homeland of Valinor to live the next few thousand years in peace and harmony.

Gandalf with Galadriel, Council of the Wise (White Council)-The Hobbit
Add a photo to this gallery
Retrieved from "https://lotrfanon.fandom.com/wiki/Gandalf_Ol%C3%B3rin?oldid=23803"
Community content is available under CC-BY-SA unless otherwise noted.