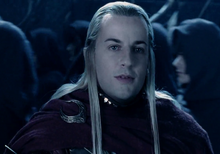 Other names
Titles
Marchwarden of Lórien
Date of birth
515 3A
Year ascended to the throne
Date of death
November 23, 3001 3A
Realms ruled
Spouse
None
Weapon
Bow, sword

Haldir Galahon was a Silvan Elf of Lothlórien, serving as the Marchwarden of Lórien who guarded the forest's northern borders.

On November 5, 3001 3A, Haldir, Rumil, and Orophin were the first to witness the Fellow enter the eaves of the forest. The brother welcomed the Fellowship, including Legolas, son of Thranduil, as one of his kindred from the north and recognized Aragorn as a friend to Lady Galadriel. They spent the night on a flet, or a platform in the trees. During the night, Haldir and his brothers heard that a group of goblins were passing through the woods. They were able to kill them and return to the flet. When he returned, Haldir saw a strange creature at the base of the tree, which Frodo guessed to be Gollum.

Later on November 23, Haldir led a force of 1,200 skilled Wood elves from Lothlórien to Helm's Deep, the great fortress of Rohan, having been sent by Lord Elrond of Rivendell and Lady Galadriel. He was there to honor the allegiance made in the Battle of the Last Alliance. Aragorn and Legolas were happy to see him and gave him an honorable welcome.

At night, Haldir and the elves were stationed on the Deeping Wall. The initial waves of Uruk-Hai, who were inadequately trained and incompetently commanded, were easily defeated by their Elven and Human foes. Initially winning, the Elves held off the relentless Isengard assault while Haldir, Aragorn Legolas, Gimli and others dealt with the siege ladders. They had as many skilled and fast archers to shoot the flank of a unit of Uruk-hai guarding a battering ram being carried up the Hornburg's ramp to the keep's gate. The battle was initially looking good for the Free Peoples until a berserker Uruk-hai set off a bomb that blew a hole in Helm's Deep's outer wall.

The combination of shock and severe casualties rapidly turned the tide of battle against the besieged forces. Haldir was still managing to hold the Elves' position on top of what remained of the Deeping Wall, the sheer number of Uruk-hai was too much for the Elves, and hundreds were killed, but died valiantly in slaying as many Uruk-hai they could. When Aragorn called in a retreat to high keep and shut the entrance, Haldir who was engaged in battle on the Deeping Wall, to fall back to the keep. All the remaining Galadhrim Warriors began to retreat up the rear stairs to the keep, but as Haldir passed on the command, he was attacked from either side by two Uruk-hai. He killed both, but one stabbed him in the stomach with the inward-spike of its sword before it was slain. While in a daze, looking out at several bodies of his fallen friends and seeing all his brethren falling back, he was slashed on the back of his neck. Aragorn and ran up to save their fallen friend, but it was too late.

Retrieved from "https://lotrfanon.fandom.com/wiki/Haldir_Galahon?oldid=16018"
Community content is available under CC-BY-SA unless otherwise noted.