Arnor, also known as the Northern Kingdom, was a kingdom of men located in the land of Eriador in Middle-earth. The name probably means "Land of the King", from Sindarin Ara- (high, kingly) + (n)dor (land).

Before the foundation of Arnor there was already a sizable Númenórean population living there, a result of the slow emigration of Númenóreans which had started under Tar-Meneldur and Tar-Aldarion. Before the arrival of the Dúnedain, Arnor was home to Middle Men of Edain stock, and the early colonists soon interbred with the indigenous population. Arnor was originally favoured over the more southern regions (Gondor) because the Elves under Gil-galad lived near it across the river Lhûn. However, in later days after the Númenóreans fell under Sauron's shadow they settled more to the south. This led to a situation where Elendil arrived in an area populated by people who, unlike his own Númenóreans, were mainly still friends with the Elves, and unlike Gondor to the south in Arnor much knowledge of the Elder Days was preserved.

Arnor's second king Isildur (also King of Gondor) was killed in TA 2 by orcs in the disastrous Battle of the Gladden Fields. His three eldest sons were killed with him, but the fourth and youngest, Valandil, survived and became king of Arnor (TA 2 or 10?).

Because Valandil and his heirs did not claim the throne of Gondor the realms were split, but Arnor's ruler kept the title High King, whereas in the south the ruler was just King. At its height, Arnor borders extended from the Ice-Bay of Forochel in the north, the river Greyflood down to Belegaer in the south, the river Hoarwell in the east, and the river Lune in the west. The capital city was Annúminas, and the realm included other cities such as Fornost, Tharbad, Lond Daer, and Tyrn Gorthad.

Human folly and the plots of a deathless evil had undone this dream. Arnor was no more; divided into the three kingdoms of Arthedain, Cardolan and Rhudaur, the Dúnedain of the North spent their strength in foolish, petty wars and while corruption and ambition sapped their strength, enemies gathered on their frontiers. Arnor's capital was Annúminas on Lake Evendim, but by TA 861 Fornost Erain had become the capital instead as Annúminas became depopulated.

After the death of its tenth king, Eärendur, in 861, Arnor was shaken by civil war between the three sons of Eärendur. The eldest son, Amlaith, claimed Kingship over all Arnor but was reduced to only ruling the region of Arthedain as his kingdom, while the other sons founded the kingdoms of Cardolan and Rhudaur.

Arnor was refounded in name by Arthedain's king Argeleb I, when Cardolan placed itself under the suzerainty of Arthedain. However, even Arthedain was eventually destroyed. The people of Arnor were mostly wiped out by the wars, but the Hobbits survived in the Shire, men survived in Bree and probably other villages, and the Dúnedain of Arnor created new homes in the Angle south of Rivendell, where some of them became known as the Rangers of the North.

Aragorn II as King Elessar refounded the Kingdom of Arnor as part of the Reunited Kingdom, and made Annúminas his summer capital. After the fall of Sauron, Arnor was safe again for human population, and although it remained less populated than Gondor to the south, in time Arnor became a more densely populated area again, even when it had dwindled in size due to the independence of the Shire.

One of the two great divisions of the descendants of the Númenóreans in Middle-earth (the other being the Gondorians of the South-kingdom). The North-kingdom of Arnor had originally held the capital of High King Elendil at Annúminas, and the Dúnedain of that land were ruled for centuries by the descendants of Elendil's elder son Isildur.

Before the end of the first millennium of the Third Age, the land of Arnor fell into dispute between the sons of King Eärendur, and the Dúnedain who lived there became divided into three realms: Arthedain, Cardolan and Rhudaur. One by one, these kingdoms fell, until at last the Dúnedain of Arnor had become a dwindled and wandering people. Nonetheless, their chieftains maintained the bloodline of Elendil's eldest son, and Aragorn - among whose titles was Chieftain of the Dúnedain of Arnor - was his direct descendant through many generations.

The soldiers of Arnor were renowned during the Second Age for their skill and valour. Training men of Arnor during the Second Age instilled within their soldiers a martial spirit and ardor, goading them to fight to the death against the hordes of Mordor, Rhûn, and Harad. Every man was physically imposing: being very tall at over six feet, very broad, and very strong as well. Every single soldier was in peak fighting condition and ready to fight against Sauron's hordes (especially during the War of the Last Alliance). The three major weapons they used were spears, longswords, and longbows. They also knew how to form cohesive box-formations, which were sturdy enough for both offensive and defensive purposes. The soldiers wore heavy plate armour and utilised large shields made out of multi-layered wood and edged in metal for reinforcement. 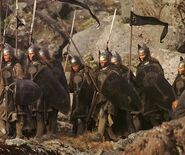 Add a photo to this gallery

Populated mainly by Bree-men, Eriedain and Dúnedain it is the core of the Kingdom.

Populated mainly by the Dúnedain and Rhudaurrim, it still remains a rough land

Forochel is the least developped are due to its climate.

Retrieved from "https://lotrfanon.fandom.com/wiki/Kingdom_of_Arnor_(fourth_Age)?oldid=18987"
Community content is available under CC-BY-SA unless otherwise noted.