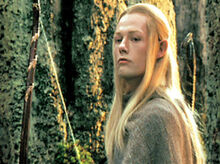 Rúmil Galahon was an Silvan Elf of Lórien and brother of Haldir and Orophin, the Marchwarden of Lórien, in the Third Age.

During the early years of the Third Age, Rúmil joined the ranks as a border-guard of Lórien and guarded the border of the country to the west together with his brothers.

In 3001 3A, Rúmil was present at the Fellowship of the Ring's first meeting with the Silvan elves. Later, he and Haldir guided the Fellowship to Caras Galadhon.

Retrieved from "https://lotrfanon.fandom.com/wiki/R%C3%BAmil_Galahon?oldid=11758"
Community content is available under CC-BY-SA unless otherwise noted.